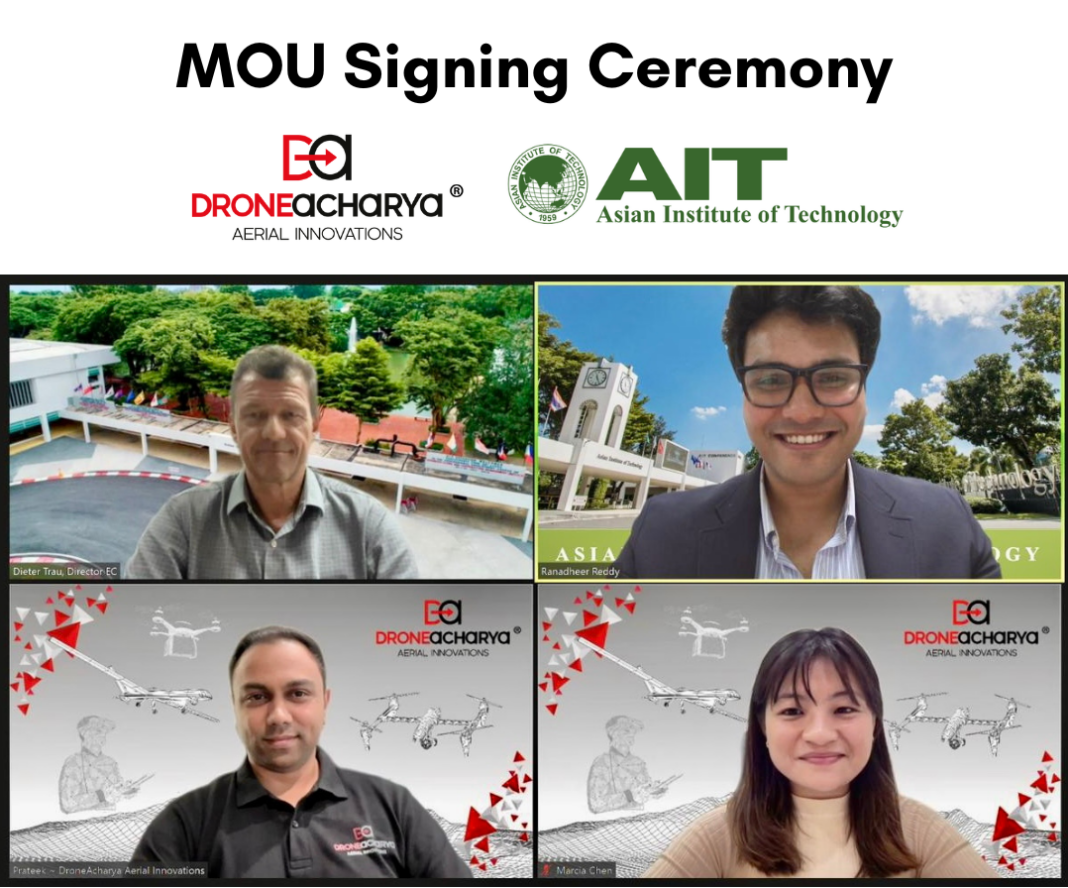 DroneAcharya Aerial Innovations, a leading Indian drone service provider and certified training organization, announced its expansion into Southeast Asia through a partnership with the Asian Institute of Technology (AIT). The collaboration aims to develop projects utilizing drones and GIS technology in Thailand and neighboring countries, as the company looks to establish a foothold in the Southeast Asian market.

DroneAcharya Aerial Innovations, an Indian drone service provider and certified drone pilot training organization, announced an MOU with the Asian Institute of Technology (AIT) in Thailand. The partnership was formalized by the attendance of Prateek Srivastava, Founder & MD of DroneAcharya, and Marcia Chen, Sr. Manager of BD & Sales from DroneAcharya, as well as Prof. Dieter Trau, Dean of the School of Engineering and Technology and Director of the AIT Entrepreneurship Center, and Ranadheer Mandadi, Program Officer from the Special Degree Program Office at AIT.

DroneAcharya Aerial Innovations is expanding its operations globally, starting with the Indian market and expanding into other countries such as the Middle East, United States, Central Asia, and Southeast Asia. As part of its expansion strategy, the company is introducing a range of drone training courses and is the first Indian drone start-up to be listed on the BSE SME platform.

The use of drones in various industries is on the rise as they provide valuable insights and data collection through aerial surveying. By integrating Artificial Intelligence, the data collected by drones is transforming the way businesses analyze, survey and map their operations. The global drone market is projected to reach $51.85 billion by 2025, showcasing the significant growth potential in the drone industry. Southeast Asia, including countries like Thailand, have a large potential for expansion in areas such as Geographic Information Systems (GIS), development, AI/ML, and drones. The partnership between DroneAcharya and the Asian Institute of Technology (AIT) will not only provide advanced solutions to businesses, but also create job opportunities for drone pilots, GIS experts, engineers and GIS developers.

“Drones and geographic information systems (GIS) are two examples of cutting-edge technologies finding widespread use across a number of sectors. By providing limitless new opportunities from previously unfeasible viewpoints, they are revolutionizing the old methods. DroneAcharya and AIT are teaming together to break into the Thai and Southeast Asian markets with drone and GIS-related co-development projects. We are planning to launch shortly and have some initiatives in the works.” says Prateek Srivastava, Managing Director at DroneAcharya Aerial Innovations Limited.