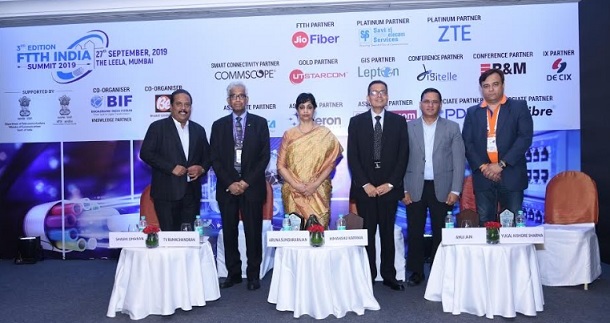 New Delhi, Delhi, India, 28th September, 2019: Broadband India Forum and Bharat Exhibitions had come together to organise the flagship event on Fiber-to-the-Home called FTTH India Summit 2019 with the title, “Vision of FTTH in India and Current Trends of FTTH Technology across the Globe” in Mumbai today. The conference entailed discussions and deliberations on critical topics such as the Role of Fibre-based Technologies as a Key Enabler for Digital India, Key Business Drivers & Successful Future Business Models, and the role that FTTH has played to serve a host of start-ups who range from building products, solutions & applications to solve niche problems typical to India. The event witnessed participation from a galaxy of CEOs, CTOs from leading international and local organizations who spoke about the relevance of FTTH in propelling India’s digital growth story and how it can complement the wireless technologies by making optimum utilization of its resources.

The Conference also laid out the blueprint for the next level of growth in India’s GDP which would be based on a pure Digital roadmap. As per the National Communications Development Policy (NDCP), every citizen should be assured a universal broadband connectivity of 50 Mbps, which would in turn provide 1 Gbps connectivity to all gram panchayats by 2020, and 10 Gbps by 2022, ensuring connectivity to all uncovered areas. Fibre will play a key role in enabling this, as a part of the Government’s ambitious Bharat Net programme to provide high-speed broadband connectivity for all. Compared to developed economies like South Korea, China, Japan and the US, where mobile towers have fibre enabled backhaul up to 75-80%, India continues to lag in the region of 30%.

The government intends to increase India’s fibre footprint to 7.5 million fibre kilometres by 2022. Among the Infrastructure needs as listed for the common man, Fibre infrastructure ranks right up there along with other needs like Water, Roads, Ports etc. In fact, Fibre could be the most critical infrastructure that we need today. The 3rd edition of the FTTH Conference made an important beginning by addressing the two biggest challenges that our nation is facing today, which is ‘accelerating the GDP growth’ and ‘kickstarting demand’. The Conference, through its deliberations attempted to translate Policy Objectives to reality and in fact brought about a total perspective turn-around by encouraging the industry to make the policy a reality.

Speaking at FTTH India Summit 2019, the Chief Guest of the Conference, Ms. Aruna Sundararajan, former Secretary-Telecom & Chairman, Digital Communications Commission said, “Fibre, like spectrum is a national resource. The Centre has given it high priority and is committed to complete fiberisation of the country. It is now up to the states to realize the importance of a continued and time-bound rollout and that this will be critical to enhancing their economic competitiveness. For the rest of the world, a 10% increase in internet penetration leads to a 1.3% increase in GDP, while in India a 10% increase in internet traffic leads to a 3.3 % increase in GDP. That is a HUGE multiplier.”

The Conference further highlighted the convergence of the three Government programs, ‘Digital India’, ‘Start-up India’ and ‘Make in India’, where India was the Producer, Consumer and Distributor of Content and Services; a convergence tailor-made for India. The world is at the cusp of a Digital Content and Services explosion, and India has not even been able to harness this opportunity.

The participants at the Conference concluded that many of the ‘unicorns’ that will emerge in future will be in the area of digital content and services, and for that to happen, the country need Fibre! Speaking at the FTTH event, BIF President Mr. TV Ramachandran said, “Although India’s mobile broadband story is second to none, it has not been adequately mirrored by a similar increase on wired broadband. Finally, all mobile traffic has to be hauled back through fibre which is happening very slowly.

This is even more important because mobile traffic is becoming increasingly data heavy and mobile spectrum will not be sufficient to address this. Prioritising and accelerating rights-of-way to ensure quick fibre rollout as per the NDCP agenda is imperative. I look forward to all stakeholders including the centre, the states, the Telcos and affiliated industries, making a concerted effort towards enhancing the fibre network roll-out across the country to complement our Digital India aspirations.”