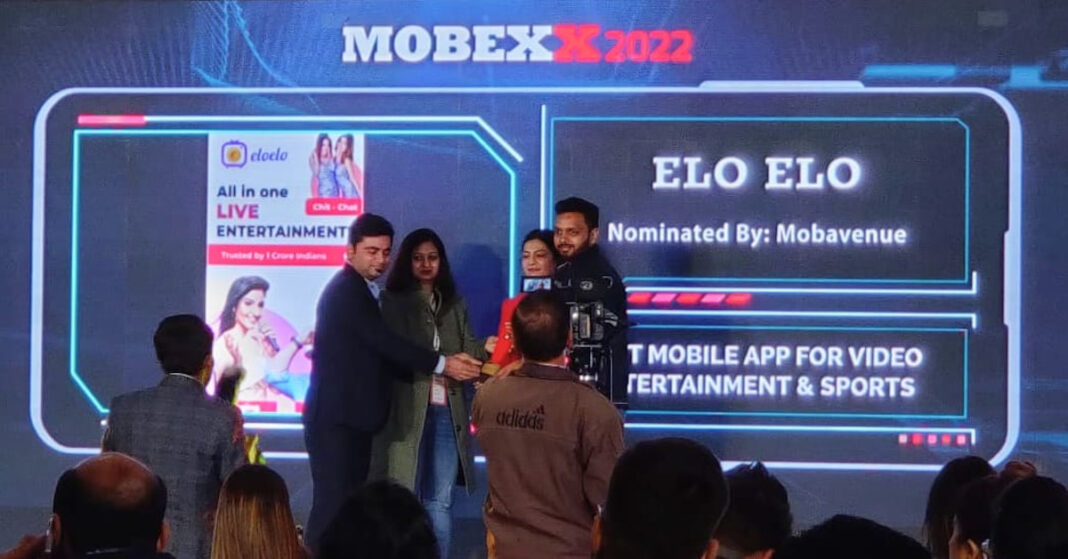 20th December 2022, Bengaluru: Live streaming has changed the world as we know it and empowered content creators to reach a wider audience across India, build a community of fans and fellow creators alike, and monetize their content along the way! The rising preference for live streaming over static social media posts, the growing popularity of video games and e-sports, the increased usage of smartphones across Bharat, and the adoption of cutting-edge technology by leading platforms, point to the rapid growth trajectory of the digital media sector in India.

A pioneer in this space, Eloelo – India’s first live streaming and gaming platform, has been recognised as ‘Best Mobile App in Video Entertainment and Sports’ 2022 at the MOBEXX Awards 2022 by Adgully.

Last year the title was bagged by MX TakaTak.

Bangalore-based Eloelo is a creator-led social gaming and live-streaming platform that was launched in 2020 by Saurabh Pandey and Akshay Dubey. Eloelo combines live streaming with social games that are very local to India such as Tambola, Tol Mol Ke Bol, Chidiya Udd, etc.

Speaking on the occasion, Saurabh Pandey, Co-founder and CEO said “I would like to thank the organizers for the recognition. Eloelo is building the future of Live interactive entertainment for Bharat. I would also like to give credit to the team behind the mission, for developing the best tech for the ease of our audience.

The MOBEXX Awards are designed to recognise and celebrate excellence in Mobile Marketing & Advertising. The awards seek to set an industry-wide benchmark in mobile engagement. MOBEXX Awards will be a true marker for mobile initiatives that are innovative, creative and effective.

The app has crossed 12 million users, making the home-grown app the most popular Live Adda in India with 77% of users from non-metro cities. The app hosts more than 24,00,000+ live streams every month.The company believes that the future of entertainment is Live & Interactive, and indigenous entertainment combined with gaming is a great way for creators to connect with the audience of Bharat. Eloelo is firmly positioning itself as the “Bharat Metaverse” and looks forward to introducing more innovative features like AR Filters in the near future. With more than 15 Live formats on the App, the company believes it is uniquely positioned to be a leader in the Live streaming space.

Eloelo has collectively raised $15 Million with the last Series A round being $12.2 Million, led by KB Investments, Kalaari Capital along with existing investors, Waterbridge Ventures & Lumikai Fund.