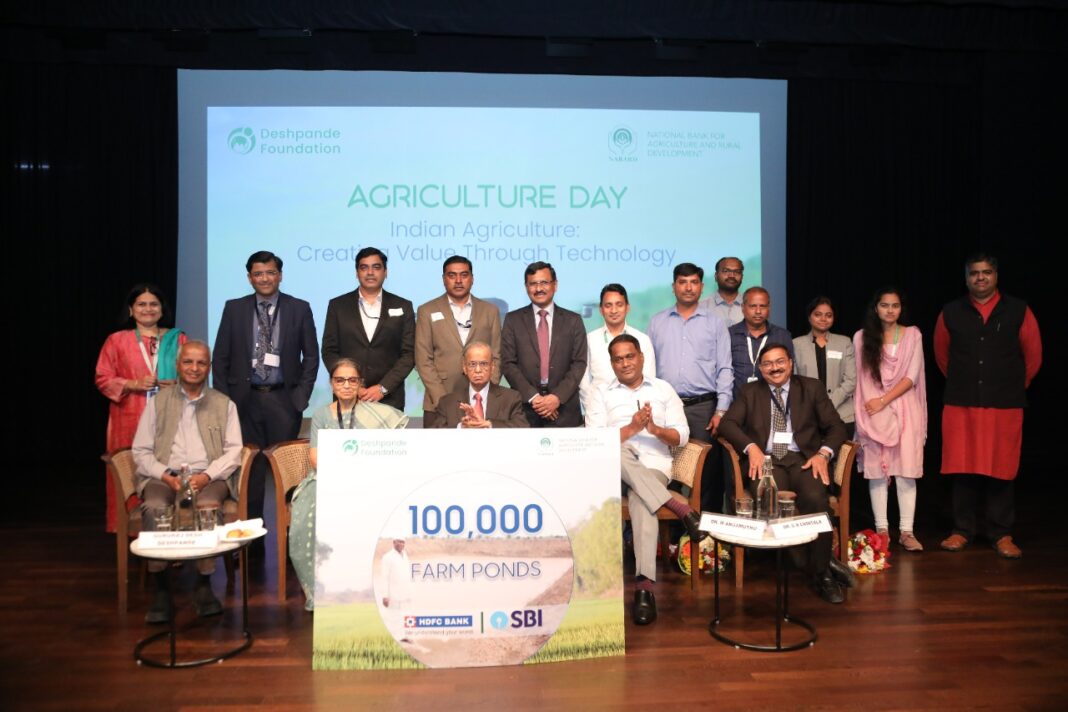 – The Deshpande Foundation launched a major initiative on Agricultural Day 2023, bringing together leaders from the development and agri-tech industries, including Mr. Narayana Murthy and other experts, to unveil the project to construct 100,000 farm ponds.

Bangalore, 24th January 2023: On January 24, 2023, the Deshpande Foundation, a Hubbali-based organization focused on creating sustainable and scalable enterprises, hosted an “Agriculture Day” event in partnership with the National Bank for Agriculture and Rural Development (NABARD) at the Bangalore International Centre. The event brought together experts from the development and agri-tech sectors to discuss topics such as efficient production systems, agri-value chains, and market connections for agricultural products.

During the event, the Deshpande Foundation announced its “Greening India” initiative, which aims to construct 100,000 farm ponds for farmers in rainfed regions across India, with support from NABARD and in collaboration with financial institutions like HDFC Bank and SBI. The organization has already built 8,000 successful farm ponds in North Karnataka and Telangana, 1,000 of which are on a market-facing model. The success of these early stages of the initiative has led to the Deshpande Foundation scaling up the project to construct an additional 100,000 ponds.

Speaking about this, Dr Gururaj Desh Deshpande, Co-Founder, Deshpande Foundation, said, “It has been our mission to boost sustainable development through innovative use of technology and scaling socio-economic growth through entrepreneurship. We have launched several initiatives such as setting up India’s largest startup incubator in Hubbali, Karnataka. The agriculture sector is crucial to India’s continuous growth and food security, and that’s why Deshpande Foundation is working closely with key stakeholders to support the sector. This event served as a platform for impactful discussions and knowledge sharing on future of agriculture in India, and how technology is going to be a key in overcoming the challenges faced by farmers.”

The Indian agriculture sector is still dependent on rainfall, despite 75 years of independence. A large portion of cultivated land is classified as rainfed. Deshpande Foundation has undertaken a sustainable solution of building farm ponds without plastic lining using satellite mapping of surface water flows to address irrigation needs in these regions. Speakers at the event provided insights on various topics.

Infosys founder, Mr. Narayana Murthy, discussed the path for tech-driven agriculture development in India. A presentation on farm ponds was among the event highlights. Panel discussions covered topics such as the impact of technology on agriculture, SBI initiatives related to agri-finance, and using technology to create value chains and market connections. The event also featured a startup showcase and curated investor interactions.