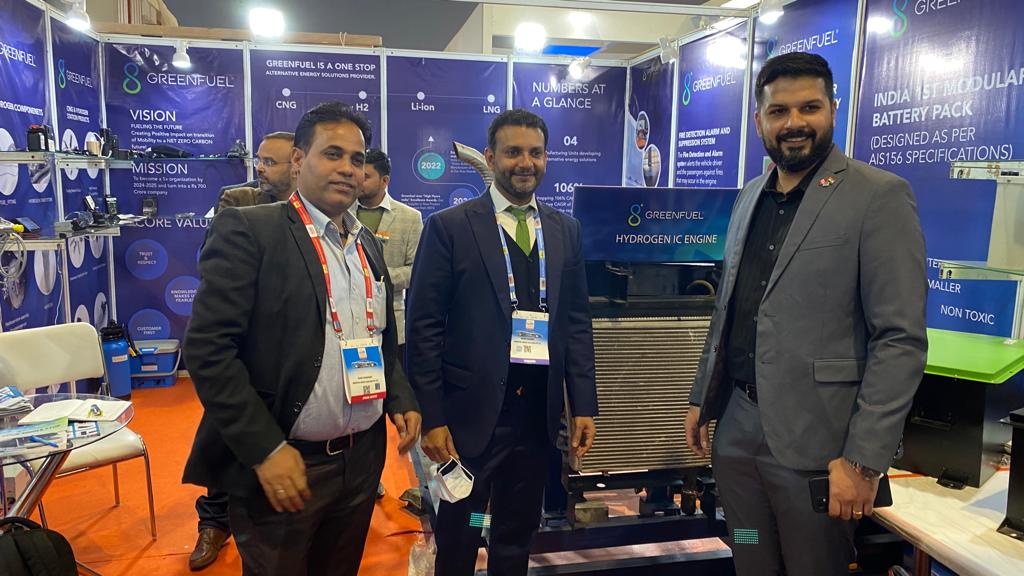 18th January 2023, Delhi: Greenfuel Energy Solutions Pvt. Ltd., a leading provider of clean mobility solutions for businesses, attracted a large number of visitors at the 16th Auto Expo Components, held at Pragati Maidan in Delhi. Many visitors were particularly drawn to the hydrogen IC engine on display, which caught their attention with its striking design. This interest was likely spurred by the recent announcement of the National Hydrogen Mission by the government, which has sparked curiosity among automotive enthusiasts and manufacturers about the potential of hydrogen engines.

The Greenfuel prototype on display at the expo demonstrated the conversion of a diesel engine to a hydrogen engine, highlighting the potential for clean and sustainable transportation. In addition to the hydrogen engine, Greenfuel also showcased a variety of other clean mobility solutions, including CNG and hydrogen station and vehicle components, Li-ion batteries, and electronic items.

Speaking about the prototype, Akshay Kashyap, MD, Greenfuel Energy Solutions Pvt. Ltd., said, “Green Hydrogen is the fuel of the future and people were keen to understand how it would power a commercial vehicle. However, in the current scheme of things, Hydrogen powered Fuel Cell Electric Vehicles are still a distant dream, and hence in the interim, conversion of diesel engines to Hydrogen IC Engines is more relevant.”

In its 16th year of existence, Greenfuel has been a leading supplier to Maruti Suzuki, Tata Motors, Ashok Leyland, VECV, Mahindra, and several other brands manufacturing passenger and commercial vehicles. With a whopping revenue CAGR of 106% in 2021-22, it has maintained a revenue CAGR of 29% over the past five years despite the severe economic downturn brought on by the pandemic.

“We are a market leader in CNG components and have made significant developments towards creating an indigenous Hydrogen IC Engine. We are driven to develop alternative mobility solutions and with the conversion of this diesel to hydrogen engine, we would further strengthen this commitment,” added Akshay.

Greenfuel Energy Solutions has been investing in its research and development division and expanding its workforce. The company has seen a 122% year-on-year increase in staffing, and now has 341 employees across its four plants. Greenfuel is credited with developing India’s first modular battery packs, and the company boasts that vehicles using its CNG systems have covered over 30 billion kilometers. Greenfuel has positioned itself as a leading provider of clean mobility solutions in India and is now expanding its presence to the African and European markets.