S Block Quantum Leap is a global Blockchain company and along with this one of its kind collaboration also launched their S Block E-Wallet. For this occasion, Peter Buser, President of S Block Foundation and Dr. Eric Ong, International Community Advisor were present. Along with them Bollywood Actor Ranjha Vikram Singh of Running Horses Films also graced the launch.

Talking about this collaboration, Ranjha Vikram Singh said, “We are excited about this new venture and this is just the start of a great partnership. We shall be releasing the first motion poster of the movie really soon and we are sure this movie will be remembered by the audiences for the time to come.”

Dr. Eric Ong, International Community Advisor said, “In India entertainment is a billion dollar industry. We are bullish about our plans for this market and really looking forward to our very first collaboration with Running Horses Films. The viewers can expect to see more from us in the times to come.”

Ranjha Vikram Singh is a well-known Indian actor who was seen in blockbuster films like Heropanti, 25 Kille, Rana Vikrama etc. He has now branched out into production as well and has already produced two films under his banner, Running Horses Films. This is the third movie that is being produced under this banner and for the same they are collaborating with a global behemoth S Block.

The event was a mega success and the audience just can’t wait to see the first look of the movie. 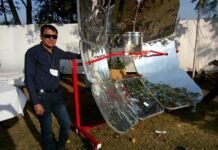