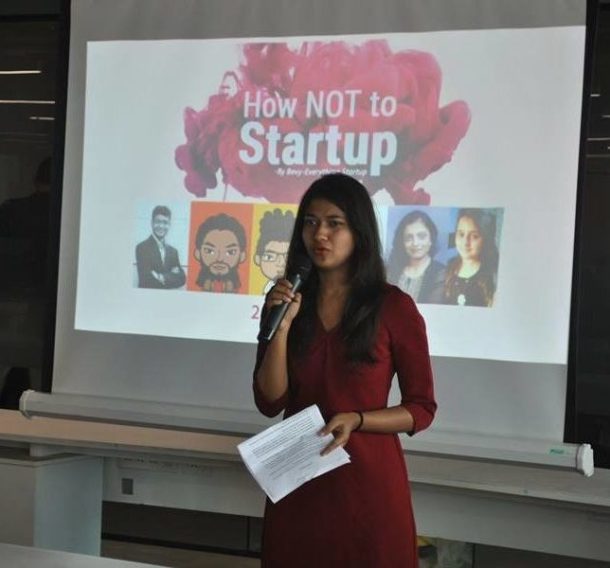 Bevy Everything Startup recently hosted an event on 17th December, 2016 in Mumbai at WorkLoft to help all the budding entrepreneurs to tackle their Business problems and to overcome all the major pitfalls they face during the setup of their startups. The Event ‘How NOT To Startup’ covered all the major aspects of a startup growth from idea to scaling.

The organizers of this event- Bevy Everything Startup are in itself a platform for the startup ecosystem, a networking app which helps the people from the startup world to tackle their problems and find the right people for their early stage companies, find enthusiasts and mentors to minimize the high startup failure rates via discussions and preemptive hacking.

More than 45 budding entrepreneurs at one stop junction were interacting with our 6 expertise speakers in this event who were the renowned and prominent faces of the Startup world. The event had jam pack discussion in 5 speaking sessions extracting the orthodox ways of how to grow a startup and giving the new and unique ideas to all the attendees who are from the startup ecosystem.

Starting with Chirag Gander, the mastermind from The Minimalist shared his interesting ideas and designs which they made for their own firm and make the audience feel the journey of The Minimalist by sharing his own life’s experiences and the major pitfalls he faced during his early days of startup. The major story behind the success of The Minimalist to build his company which he shared during this event was through a Facebook page they created and came into limelight leading with ‘The Minimalist’, now this company is one of India’s fastest growing Design agencies.

The audience being very interactive was making this event even more interesting and exciting for the next speaker who was Mr. Harneet Bhalla a Marketing Strategist also a Tedx Speaker who revealed the Strategies and importance of marketing during a startup and he gave useful key points and also popped out the negative and negligible points of Marketing which should be avoided by a Startup. Shubho Gupta and Anthony Albuquerque founders of The Socialist uncovered the basic ideas of ‘How to develop a product’ & explained the attendees. Shubho and Anthony molded the minds of the attendees who were startup enthusiast on what one should ‘AVOID’ before developing a product for their startup.

The Event’s most interesting part came live when Sarika Kulkarni who is the Founder of RAAH Foundation picked out the most influential and effective topic for every Startup enthusiast – How NOT to Raise Funding and when to raise funding in a startup.

Attendees keen on this topic and the question answer round goes a little bit long after this speaking session.

Last part of this event covered with a speaking session of Mansi Thakkar, a young Dynamic mind who is a Motivational Speaker also a Startup Trainer. She exploded the mind of the attendees through her agendas and also the important role psychology plays while scaling one’s business.

This whole event was covered live by Chirpy Birdy who was the Media Partner of the event. Also Bevy took personal interviews of all he speakers just after the speaking session transforming it live on internet for the rest entrepreneurs.

The event went successful and ended with lot of networking and meetings. Bevy hopes to reconnect with everyone again with another event, bringing new theme and new stuffs for the startup ecosystem in future.

Previous article
This Startup Creates a Platform to Connect SMEs to Financial Institutions Like NBFCs and Banks for Funding Based on the Transaction Data Generated by SMEs
Next article
What can we expect from Indian Startups in 2017?