Greater Noida, Uttar Pradesh, India | 23rd November 2021: Shiv Nadar University-Atal Incubation Centre (SNU-AIC) hosted ‘IdeaXchange’ – a two-day event that connected over 60 founders from more than 30 start-ups being incubated by SNU-AIC with industry stalwarts, investors, mentors, key government officials, and innovation and technology heads from across the country. The start-ups pitched their ventures to investors and business executives for potential funding, collaboration opportunities, and mentorship for scaling up and capacity-building.

Mr. Richard Pattle, Co-Founder of True Beacon, attended the event as Chief Guest and spoke about his inspirational entrepreneurial journey after having served as an aide to the British royal family and a former combat helicopter pilot. The power-packed event also included fireside chats with key industry leaders from Deloitte, HCL, Khaitan & Co., and PwC, as well as panel discussions on important, relevant subjects for the startups. Mr. Rajesh Pathak, Secretary – Technology Development Board, Government of India, delivered a keynote address, in which he spoke about the ways in which the Government is promoting innovation through research commercialization, and the potential for start-ups.

Addressing the audience, Mr. Richard Pattle said, “This is a pivotal point in India’s history – I talk to a lot of promoters of different ages and backgrounds, and their unanimous view is that India’s time is now. The country has great potential, and the number one aspect is the incredible human capital available here. However, we need to attract more foreigners to India, because they act as a link, as ambassadors, as accelerators for Indian companies to go global and provide solutions to the world. We have witnessed a surge in interest for True Beacon Global to invest in Indian Public Markets, which is just the tip of the iceberg. This interest in indicative of the promise of the Indian growth story.”

Ms. Sheeba Khan, Chief Executive Officer of SNU-AIC, said, “IdeaXchange is a sincere effort of Shiv Nadar University’s Atal Incubation Centre towards shaping the next generation of entrepreneurs and providing them maximum support as they establish themselves or scale up. We are grateful for the incredibly supportive partners and friends from the industry as well as in the world of investors, who are helping us create value for the great start-ups that we incubate here, at SNU-AIC.”

SNU-AIC has incubated more than 50 start-ups since Shiv Nadar University, Delhi-NCR, was awarded the prestigious Atal Incubation Centre grant by the Atal Innovation Mission of NITI Aayog (Government of India) in the very first round in 2017.

Swarrnim University Empowers its Students Entrepreneurs with the Support of Gujarat CM Shri Bhupendra Patel and the State Govt.

OctaFX Takes a Look at the Race for Monetary Supremacy: Blockchain vs Legacy Finance 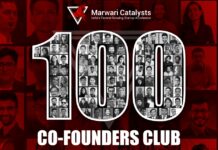