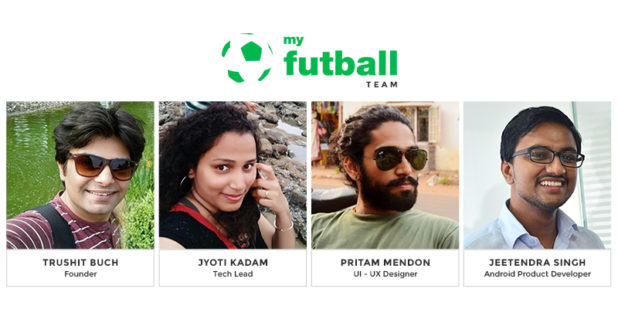 MyFutball is all about Indian football. Provides News/matches/highlights real time on i-League, ISL along with Premier International leagues and matches. A mobile based football platform for India. India’s Football app.

Myfutball is great for football lovers as well as players to get insight/updates on Indian side of the game. Myfutball gives a platform for young Indian player to showcase his/her talent on a large scale.

Well opportunity is massive with around 140 million football fans across India and growing, on social media alone active number is 30 million from tier one cities and that is only fanbase for English and Spanish leagues, there is huge market which is crying for attention. Myfutball has plans to become a marketplace for all things football, giving merchandisers/coach/ ticket booking/ turf grounds an opportunity to sell along with promoting and showing Indian football talent to huge target audience. We are publishing the interview of Trushit Buch, Founder of mobile app MyFutball.

Tell us about your industry, competition (will be great if you can share certain market trends with numbers).

There has never been a better time for Football in India, over a last decade there has been huge rise in the popularity across India. It’s far from where cricket is, though football is slowly getting limelight in India. It’s not only European and Spanish leagues but Fanbase has taken Indian leagues in a Big way. The primary reason being the increase in quality of football along with International clubs setting up camps in India. Recent example being massive popularity of futsal which was promoted at par with any of the International Football leagues.

Football is India’s 2nd highest viewed game. Had expansion of 60% more viewership in last 5 years. Having a fan base of this game is over 50 million. EPL alone has around 90 million fan base in India.

Premier league has been the first movers to get massive attention in India, Huge club teams such as Manchester united, Liverpool, Arsenal and Chelsea has been instrumental for the craze and that’s just the beginning.

The numbers represented above in the table is based on Facebook data. It shows the number of fans for the major clubs in England and Spain compared against the biggest countries in the world. Indian is on top for most clubs listed above. The numbers represent only socially active users and not the entire fanbase.

Mostly fans are from metro cities i.e Bangalore, Mumbai, Chennai, Kolkata and Kochi. This is another reason as to why there is huge market out to be exploited.

Add number of young users who would follow current football craze, which adds up to an audience potentially larger than anywhere in the world. What is your product differentiation and competitive advantage?
Myfutball is  the only Mobile driven platform for football lovers in India. Estimated football fans in India is staggering 140 Million plus large Mobile/data penetration in india. Myfutball can gain a considerable first mover advantage.

Our intention is of creating an ecosystem for football in India, wherein Myfutball becomes a marketplace for consumer to avail varied services and products ranging from coaching services to booking turf grounds to buying football merchandise. With an underlying focus on Indian football content and promotion of Indian talent.

What inspired you to start this venture?
Being a genuine football lovers/enthusiasts and a part time player, the overwhelming question always was.

What can be done for young Indian talent to look at Football as a primary career option? How to provide real time updates about Indian football to Indian football enthusiast/lovers as AIFF seldom gets the job done and hence Indian leagues do not get the desired limelight.

We believe in the sport and citing the massive potential wants to become one stop platform for all things football in India.

Who all are the founders and what is their background?

Trushit Buch –
Comes from a humble Gujarati family background, has an engineering degree in computer science. Been in to IT industry for more than a decade, Experience with B2B and B2C space. Essentially a Techno-functional consultant with 14 years of experience focusing on design and delivery of pragmatic solutions to real problems using LAMP/Mobility driven systems. Currently associated with Systems Plus Mumbai as a Mobility practice lead.

Tell us about your journey so far. What is the current team size, revenues and in how many cities have you expanded to ? (Please feel free to elaborate as much as you can). Jyoti Kadam – An experienced technical lead, with primary focus on handling server side technologies, experience in building and scaling applications.

Pritam Mendon – A self-taught design UI/UX specialist with over a decade of experience in building creatives for digital space. A hard core football fanatic, with a strong desire to see Indian Football team performing at a premier international stage.

Jeetendra Singh –  A rock star android mobile developer with an experience in building games, AR based apps along with managing media delivery through Mobility.

Trushit Buch – Founder and chief engineer. A techno functional consultant with 14 years of experience and a hunger for business development.

Some of the most critical challenges you have faced and how you overcame those?

It’s been really early days for us, we will defiantly face challenges as we move along though there would always be learning and an opportunity out of those challenges.

HUSTLE is what we believe in, keep iterating and keep moving. Always learning.

Some exciting learnings/moments in your journey so far which you would like to share with all of us?
It’s been a crazy ride so far, with ever growing engagement and fan base on our Facebook page, it stamps our belief in the game and potential of the market.

What can we expect from you in the coming months?

Some of the big milestones are: