The Akshaya Patra Foundation was honoured with the ICAI Gold Shield Award for Excellence in Financial Reporting for the year 2016–2017 under the Category XII – Not-for-Profit Sector. The award was presented by Shri M Damodaran, former Chairman, Securities & Exchange Board of India (SEBI) in Mumbai to the CFO of Akshaya Patra, Mr R Ganesh. 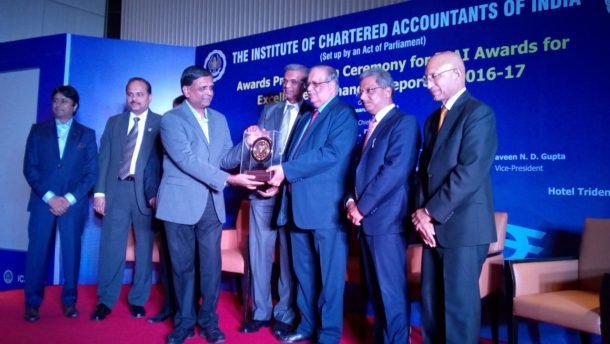 The award was given based on the accounting practices adopted by the Foundation, the policies adopted for disclosure, and presentation of financial statements, among other information contained in the annual report and also the basis of degree of compliance with Accounting Standards, statutory guidelines, regulations, etc.

The Akshaya Patra Foundation has the distinction of being inducted into the Hall of Fame for winning the ICAI Gold Shield Award for Excellence in Financial Reporting five years in a row, under the same category for its Annual Reports from 2008-09 to 2012-13.

On receiving the prestigious award, Shri Chanchalapati Dasa, Vice Chairman, The Akshaya Patra Foundation said, “We feel honoured and humbled. It is a recognition of our continuous and rigorous focus on transparency and accountability. We uphold the paramount principle of financial transparency in every single activity as an NGO, as it is the key to trust and reliability.”

Coca-Cola India’s Project Unnati Has Touched the Lives of 3.5 Lakh Plus Farmers Across 12 States in India