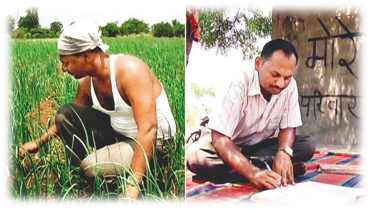 A young and learned man gets up this day late than usual. When he opens the eyes, he feels innovative and different. This is very new to him and he is unconscious of it. He has a family of four people: drunkard father, murmured mother and marriageable sister. He keeps the bed in home, takes bath, eats and follows the street of the cattle house. Aside of the street, there is a hotel of his friend, who calls him to read a newspaper. ‘Thousand billions corruption in river joint project’ this news shocks him terribly, and makes restless without his relation with politics and society. Actually this news is against his moral thinking. On the other hand, his parents hold him responsible for every incident as he does deliberately. Family clash causes to make his life restless and nervous.Every day, he has to face them with no interest.

This day also his father trashed to mother for money to alcohol and both balm him. He decides to sleep this night hungry but he can’t because hungry stomach and corruption. Slowly, he is getting a dream in it he gets a birth in a social reformers home as his son.He becomes a naughtiest child in the course of time. He likes grounds instead of study so he spends a lot of time on the grounds who can’t consider the exams also. He enjoys whole education without study. He plans to become the prime minister, and making superpower nation, with young and spotless leaders. He sees this dream with the help of his papa which seems illusive and improbable. To fulfil the dream he plans to establish the new political party. He arranges a lot of assemblies, marches and wanders all over nation for party’s propaganda as a candidate of the prime minister forgetting he has a life.

Unfortunately, they assassinate his papa, and it breaks his leadership and work. But, he is not agree with giving power in the hands of incapable and corrupt leaders and politicians. Again he stands up firmly, and his is not let taking him a rest. He is also ready to sacrifice the life for nation. He ignores the family and self-needs, these seems useless. He works to inspire people through his assemblies, and give belief to make it superpower. He reaches in every home as a young, honest, merciful and lovely leader. He contests an election against most spotted and bolt leaders. This constituency and places are new but he decides to finish disloyal and dirty politics. He has no guarantee of victory and this thing of defeat makes him miserable.At last he wins election by ten votes, and his party also general election of the nation. He begins to take an oath as the prime minister.

It is a time of the morning so his mother comes in the yard to seep it. The people make a noise about there is no water to the taps. His mother begins to call him, constantly. He considers that it is not easy to become the prime minister from poor and helpless family, because it needs a lot money and illegal sources to earn money. With no interest he picks up the plastic pots of water and hooks which to a bicycle. He gets on it to forget kingdom in dream with reality. He gets, noting is in the life of the poor people, their dreams also!