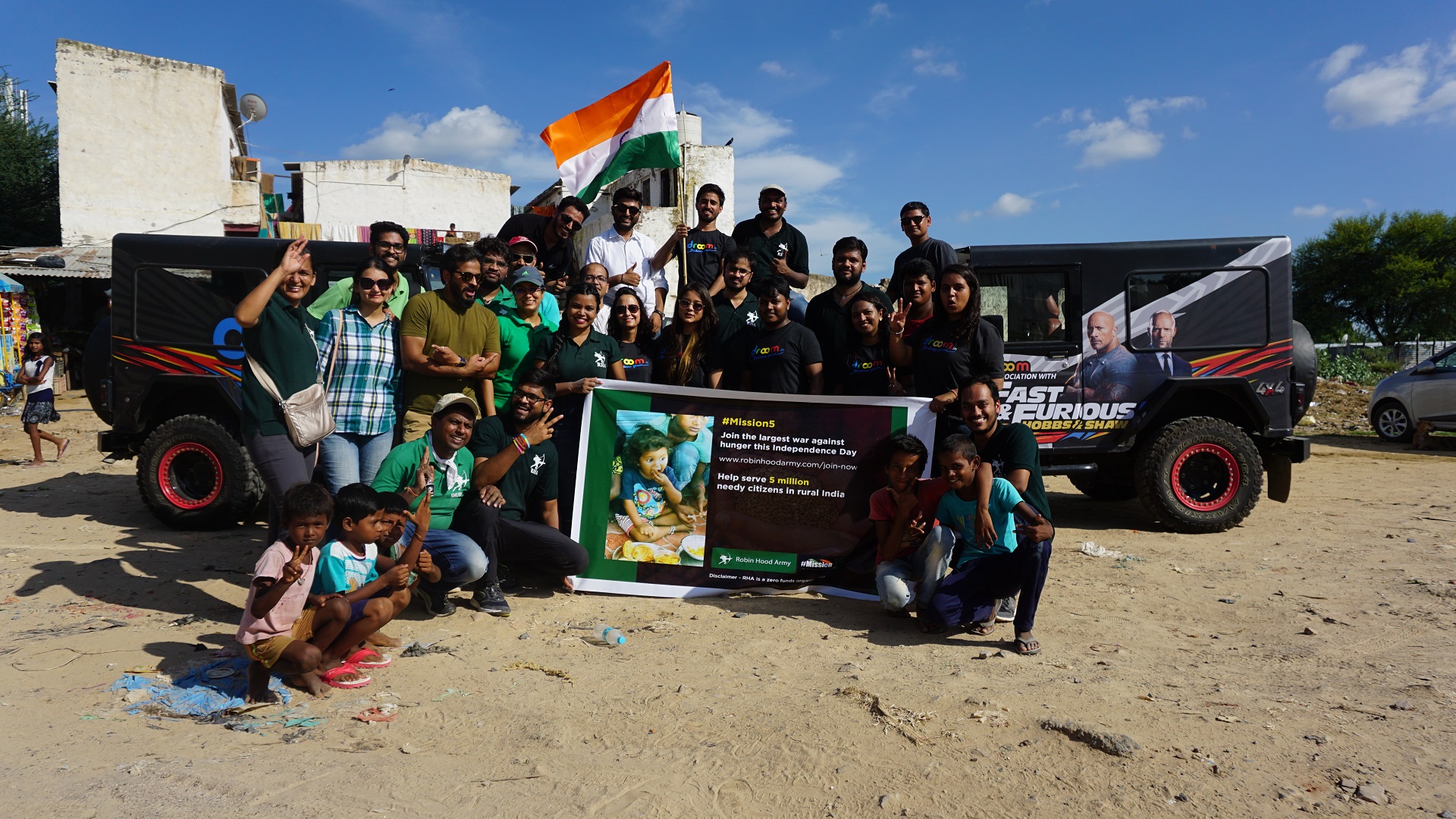 Gurugram, August 14, 2019: In a bid to reach out to the lesser fortunate sections of society and empower them with ‘Food Freedom’, Sandeep Aggarwal Foundation, supported by Droom, India’s largest and pioneering online automobile transactional marketplace organized a food collection drive at its campus. As part of this noble initiative marking the 73rd Independence Day, the company has collaborated with volunteer-based zero-funds organization Robin Hood Army for its campaign #Mission5. Droom succeeded in collecting an enormous amount of 4325 kg of food items both from the employees as well as Sandeep Aggarwal Foundation, established under the aegis of Droom’s Founder and CEO.

Armed with the purpose to collect staple food items for the underprivileged, the food collection drive witnessed a proactive participation. The enthusiasm resulted in a remarkable collection of 1544 kg of uncooked rice, 2020 kg of flour (atta), and 670 kg of uncooked pulses (dal). Of the total 4325 kg of staples collected, over 2325 kg was contributed by the employees and 2000 kg by Sandeep Aggarwal Foundation to keep up with the contribution made by Droomers. The food collected got distributed among the less fortunate residing in villages in Gurugram, where the need for food is most severe.

Sharing an insight into this initiative, Sandeep Aggarwal, Founder & CEO of Droom remarked, “The situation regarding availability of food is dire in our country, rendering a major segment of the population famished. At a time like this, it is our duty to step up and have a proactive stance towards the same. We believe that any contribution made, regardless of the quantity, will give Freedom from Hunger to our fellow countrymen. Therefore, this Independence Day, we at Droom strive to extend our wholehearted support towards Robin Hood Army’s #Mission5 and have vowed to distribute the food collected among the underfed segments of the society.”

Droom tied up with Robin Hood Army and organized this food collection drive to contribute to the latter’s initiative #Mission5. Through this project, the organization aims at covering 500 villages over 5 days, distributing the collected food to over 5 million underprivileged citizens. Robin Hood Army acknowledges Droom’s employees and Sandeep Aggarwal Foundation’s collective contribution as the highest quantity of food that it has ever received from any organization.

Appreciating the contribution made by Droom, Nitin Saxena, Zonal Lead, Robin Hood Army said, “Even after 72 years of Independence, it is unfortunate how over 194 million citizens go to sleep with an empty stomach on a daily basis. The real challenge is not lack of food but its unavailability to those who need it the most. This is why we at Robin Hood Army undertook the project #Mission5, to mobilize grains among the underprivileged. We believe that serving one’s countrymen is the biggest act of patriotism that one can partake in, and we are very grateful to Droom and Sandeep Aggarwal Foundation for collectively being the biggest contributor that we have witnessed in all our causes.”

The distribution drive has already been initiated by the volunteering team of Droom along with the volunteers from Robin Hood Army, covering small villages like Ghata village and Sai ka Aangan near Gurugram at present. Through initiatives such as this, Droom has succeeded in establishing itself as an organization that looks beyond profits and aims at asserting a positive impact in the society.

About Droom:
Droom is the 3rd largest E-commerce company in India in terms of GMV and the largest online auto marketplace for buying and selling new and used automobiles with over 80% market share of the automobile transactions online.

Droom is headquartered in Gurugram, India, with a team size of 480+. Droom has four marketplace formats i.e. B2C, C2C, C2B and B2B, and three pricing formats – Fixed Price, Best Offer and Auction. The platform offers a wide range of categories from bicycle to plane and all automobile services such as warranty, RSA, insurance and auto loan.

About Sandeep Aggarwal Foundation:
The Sandeep Aggarwal Foundation is committed towards the welfare of underprivileged children and women. Its vision is to empower and unleash the true potential of every individual. The foundation has conducted several activities supporting differently-abled children and underprivileged women since the last year and aims to continue its efforts of offering them a livelihood and quality of life they rightfully deserve.

About Robin Hood Army:
The Robin Hood Army is a volunteer based, zero-funds organization that works to get surplus food from restaurants and the community to serve less fortunate people.

Our local chapters are run by friends and colleagues, who hope to create a difference in their own unique way. For example, restaurants in the neighbourhood Green Park, will contribute to the homeless of the locality, through volunteers who live in Green Park. Our “Robins” are largely students and young working professionals – everyone does this in their free time. The lesser fortunate sections of society we serve include homeless families, orphanages, patients from public hospitals, and old age homes.