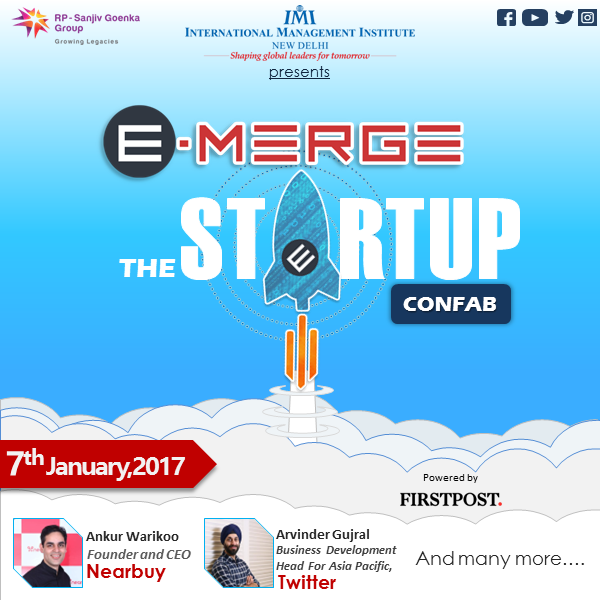 New Delhi, India: After a hugely successful first edition of E-Merge, IMI, New Delhi, is in its second year of organizing its annual Start-up summit: E-Merge 2017: The Start-up Confab. The summit is scheduled to take place on the 7th day of January, 2017 at IMI, New Delhi. E-merge is positioned to be one of the biggest consortium on startups across all business schools in the country. It is a one of its kind annual affair dedicated to providing a platform for discussion on upcoming trends in the startup ecosystem. A flagship one day event, E-Merge witnesses the participation of several founders, co-founders and senior executives from leading startups in the form of Panel discussions and Entrepreneurial talks. Panel Discussions
While no one can question the government’s intentions to foster startup ecosystem in India, but in light of so many new initiatives in recent times, eyebrows are being raised regarding the transparency and clarity of these initiatives. Apart from startups’ self-inflicted ethical mess, another major deterrent is the grassroots-level corruption. With that in mind, the first panel discussion focuses on answering the question, are we ready to face the challenges of fostering home-grown startups?

The other Panel Discussion focuses on the recent wave of consolidation among new-age companies in the entrepreneurial ecosystem wherein with the funding drying up has resulted in over a dozen buyouts of young startups in the past four months. Many startups that have barely managed the second round of funding are opting to acquire their weaker peers.

Entrepreneurial Talks
Additionally, the summit would also have a series of entrepreneurial talks by Mr. Ankur Warikoo (Founder and CEO, Nearbuy, formerly Groupon) and Mr. Arvinder Gujral (Business Development Head for Asia Pacific, Twitter). The talks give an insight into the enticing journey of entrepreneurship and are a source of inspiration for budding entrepreneurs.

E-Merge, 2017 will see participation from students across all top Business Schools, to experience entrepreneurship and learn about the virtues of future businesses.

Participants will also include alumni of IMI Delhi and other reputed colleges, who in their career seek to drive the spirit of entrepreneurship. The event will invite a healthy dialogue among current and future entrepreneurs as they dwell upon the intricacies of the industry as well as the Indian market scenario.

Last year’s event saw stalwarts like Mr. Kunal Shah (Founder, FreeCharge), Mr. Lalit Mangal (Co-Founder, CommonFloor), Mr Raghav Verma (Co-Founder, Chaayos), Mr K Vaitheeswaran (Founder, IndiaPlaza) often regarded as the ‘father of e-commerce in India’ and a host of other eminent personalities from the e-commerce world. The event was attended by more than a 1000 attendees and this year it promises to be even bigger and better.

To learn more about E-Merge and to check out the highlights of last year’s event, please visit our official Facebook Page: E-Merge 2017

About International Management Institute, New Delhi
IMI, New Delhi is India’s first corporate sponsored business school established in 1981 with the support of corporate houses such as Nestle, ITC, SAIL, RPSG, TATA Chemicals & BOC. The B-School has the distinction of being one of the few institutes to be accredited by two prestigious international bodies: Associations of MBA (AMBA) and South Asian Quality Assurance System (SAQS). We are a 35 year old premiere B-school, today ranked 1st amongst Private B-Schools and 7th amongst all Management Institutes in India by NIRF, Ministry of Human Resources and Development.