India is a country where elephants are considered sacred and are worshipped, but at the same time some people subject them to inhuman and cruel practices. In order to “train” them they are chained and beaten mercilessly, so that they can be used as a “source of entertainment” in circus shows and safaris, where they are burdened with heavy loads and deprived of their natural habitat. 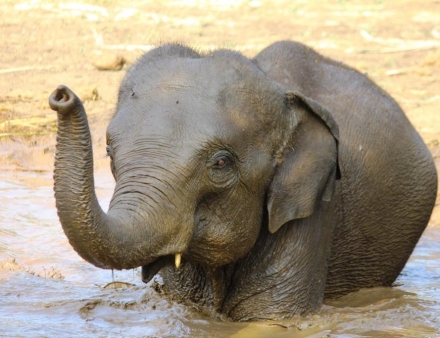 Wildlife SOS, is an organization, which works towards rescue and rehabilitation of elephants where their mission is to provide them with natural vegetation, nutritional food and large pools to bathe. In their journey of saving elephants they have come across many instances which would move hearts.

Peanut, a 6-year-old baby elephant, for instance, was rescued by Wildlife SOS from a circus. From the condition she was rescued to the condition where now she enjoys her childhood in a natural habitat and leads a bubbly life is a story in itself. Chanda, earlier known as “Elephant number 112”, is another example, who was used to haul tourists for over 20 rigorous hours a day, was found in a dehydrated, bewildered state.

Wildlife SOS is currently embarked on a journey to rescue the elephants and transport them safely to Elephant Care and Conservation Centre in Mathura, Uttar Pradesh. At present they house 20 elephants but are facing shortage of funds in the transportation of these elephants and the veterinary care. They need a total of 2 lakhs to keep the activity going on and to do so they have started a fundraiser on ImpactGuru.com. The funds donated towards this cause will help these elephants live a dignified life.