The Indian Retail market is estimated to be of $672 Billion and is one of the top five retail markets across the world. The rapid urbanisation in India with increased purchasing power has led to the growing demand of Retail sector. According to a report of IBEF – Nov’2017, the modern retail market is expected to grow from $60 billion to $180 billion during FY15-FY20. Seeing the growth in tier 2 and tier 3 cities, approximately 8500+ supermarkets have been opened up in last couple of years across country. These huge numbers signify how important is to maintain the status and quality of the retail sector in order to generate the best outcomes and revenues. It also opens up the door for new tech transformation and it seems that AI is the promise of a great future for retailers.

“We had the computer revolution, the internet revolution, the smartphone revolution but AI will probably be the biggest technological shift we have ever seen.” –Edouard d’Archimbaud, Head of Data and AI Lab, BNP.

Introduction
AIMagnifi is an Artificial Intelligence and Computer Vision based company. We primarily aim to target the unexplored combination of retail sector with the power of AI. The foundation of the company was laid in May’ 2017 by Mr. Neeraj Kumar and Mr. Devarshi Mishra. The Domains around which the company currently gyrates are Retail and Security sectors. We target to bring out the best outcomes out of these areas that would ultimately personalize and enhance the experience of the end-user. 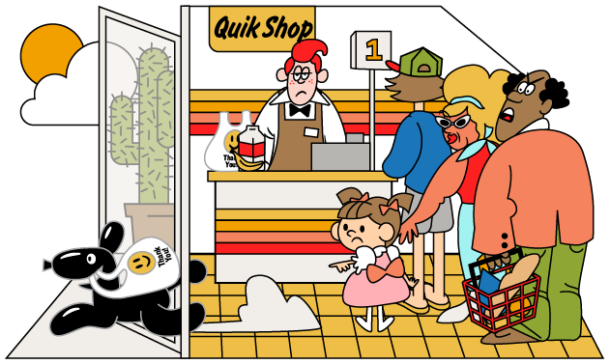 Product Overview
In August 2018, AIMagnifi has planned to launch their first product “SkippQ – A Self-Checkout App”. They believe, this is the right time to make an entry into this market segment as people have easy access to smartphones and they also have developed a taste of digital payment & smart stores.

SkippQ is a Self-Checkout app for faster checkouts and seamless shopping experience. It enables the customers to just “Scan, Pay and Go” out seamlessly without standing in long queues. They can also keep a live track on the product offers and also check their expenses in the app’s virtual cart that helps them to avoid going over budget. Even if they forget their wallet at home, SkippQ will help them to purchase things and allow them to do online payments (UPI, e-Wallets & Credit/Debit Cards) through the app itself.

During rush hours, it will give retailers the super power to cater multiple customers simultaneously and will also help them to reduce the cost of billing machines and corresponding workforce. They can also send personalised recommendation to the customers on the basis of their previous purchase history. 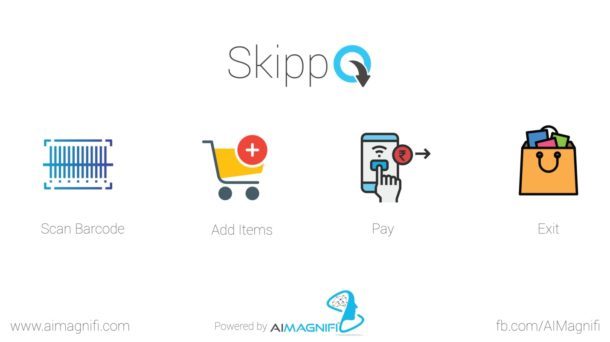 Furthermore, with a futuristic vision in mind the Research and Development team of AIMagnifi are making groundbreaking efforts to revolutionize the offline retail sector. The company is developing a 360° Intelligent retail suite (SkippQ is one of the product), powered with AI to digitize, personalize and modernize the overall offline retail experience. They are primarily trying to transform offline retail sector using high-end technologies like machine learning, computer vision (facial recognition) and data analytics. And, they are looking to roll out other products in the later phase of the year.

Founder’s Story & Mentorship Support
Both Neeraj & Devarshi are engineering graduates who turned into entrepreneurs. They were good college friends and from the initial college days, both were equally passionate towards doing something of their own. They worked on couple of startup ideas before but it couldn’t take off due to lack of experience. Later on, Neeraj worked as a Software Engineer at Newgen Software Technologies Ltd. for more than 2 years and Devarshi also worked for more than 2 years along with a growing startup – HIC Global Solutions as a lead developer. After long 3 months idea discussion and market opportunity checks, both of them left their jobs and pooled their entire savings to make an impact in offline retail segment using the power of AI.

Currently, Mr. Saarthak Bakshi (CEO -IFC | Forbes 30 under 30 Asia) is acting as Strategic Advisor to AIMagnifi and on the other side, Mohd. Sirajuddin (Director at Creator’s Gurukul | Catapooolt | DesiredWings) is also helping them in fundraising via crowdfunding – https://www.catapooolt.com/skippq.

Current Status
Currently, they are incubated in TBI-KIET Ghaziabad, promoted by DST Government of India and are completely bootstrapped. They are on-going couple of pilot programs for the self-checkout app (SkippQ) in Delhi-NCR. In later phase of the year, they have planned to roll out their second product that might consist of facial recognition system that focuses more on personalized customer experience while shopping. Also, they are ongoing a crowdfunding campaign for SkippQ where they have managed to raise around INR 1.36 Lacs in less than 2 weeks. Seeing the overwhelming response from general public they are thrilled to launch their product soon.

Rewards & Recognition
We are proud to be a part of Startup India. In 2017, We have been selected among India’s Top-100 emerging startup companies, who received subsistence grant & support for the next 1 year under NATIONAL INITIATIVE FOR DEVELOPING AND HARNESSING INNOVATIONS – ENTREPRENEUR IN RESIDENCE (NIDHI-EIR) program by Department of Science and Technology, Government of India. Recently in April’2018, AIMagnifi got selected under Top-20 Fintech startups in InFinIT20 by RBL Bank & Startup India.